Deprecated: Methods with the same name as their class will not be constructors in a future version of PHP; OptinSkin_Widget has a deprecated constructor in /home/igoram2/gadgetmakersblog.com/wp-content/plugins/OptinSkin/main.php on line 310
 Podcast #2: Fake Electronic Components - Gadget Makers' Blog

Welcome to the podcast #2 for the Gadget Makers Blog.  Listen to my story about how I unknowingly bought fake electronic components for my one of my projects, and how frustrating of an experience that was.
Also in this podcast. Is there such a thing as an fake Arduino? Many people think that because Arduino is open source there’s not such a thing as a fake Arduino. Listen and find out more!

Welcome to the second podcast for the Gadget Makers’ Blog. This is Igor Ramos, and this is a podcast and a blog about making electronics. Today I want to tell you a story of something that happened to me in the past few days, and I do believe that anyone that shops for electronic components, or actually shops for anything in general, could benefit from this story.

I’m developing this new board called OLGA, and I wanted that board to be able to communicate to the computer over serial. So I was shopping for a chip that could do that, that could interface my board to a computer. My first stop for shopping for that was eBay, so I went to eBay and I did a search for what I was looking for, the FT232R. There were a few sellers with that chip, but because I was making a new board, I didn’t want to buy just one or two. I wanted to buy around 10 chips, so that way I could use those chips in the various revisions of my circuit boards. 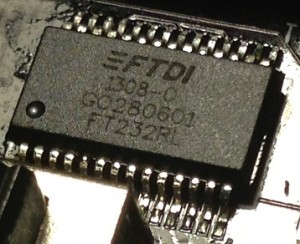 So this time, I decided to use a website that I don’t typically use. I went to AliExpress, which is part of Alibaba. AliExpress, it is a lot like a Chinese Amazon, where you have independent sellers selling through that platform. Alibaba tries to put things into place for buyers to feel confident about the sellers. Alibaba tries to build trust between sellers and buyers.

I ordered these FTDI chips. A few weeks later, they got in. Let me tell you what happened when they got in. I could not get these chips to work. When you buy a new component, a new chip, it’s always tricky for you to learn how to use it, so I didn’t know if I was doing something wrong, but I spent a lot of time troubleshooting this, going over my circuit board. Did I assign the right pin out? Did I short two pins together, that’s why this component was not working? Did I have the right drivers installed on my computer? It took me hours working on this, and then finally I was extremely frustrated.

What I decided to do instead of just throwing this out of the window and moving on, maybe selecting a different chip, I decided to get in touch with the manufacturer to work out this problem. I told them, “Hey, I’m an electronics engineer; I couldn’t get your product working. What do I do?” They were very prompt to help me. I sent them information such as an oscilloscope trace, the drivers that I was using, my Windows version, a lot of stuff. We went back and forth for a few days so that they would have all the information, but they could not find the issue. They finally asked me to send one of those chips back to their office so they could have a look at it. 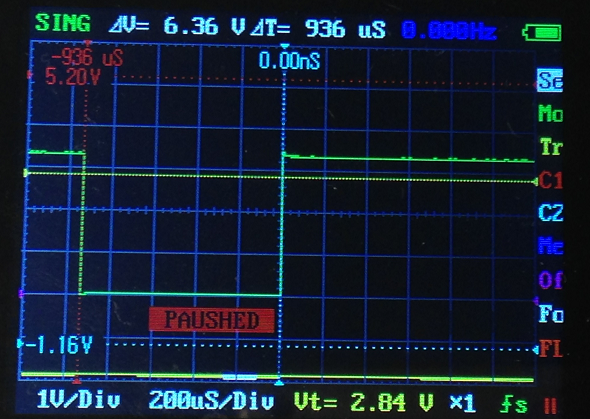 A few days later, they got back to me and said that that chip was a fake, was a non-genuine part. They wanted to know where I bought it from, which supplier I bought it from so they could take legal action against them. That was a big eye-opener for me, to find out that I bought a fake part. Buying a fake part, there’s several aspects of a fake part. We can touch a few of them. First of all, of course, it’s illegal. It’s illegal for that company that sold to knowingly sell that part. I’m not sure they did know or not. Besides being illegal, it’s just not fair to FTDI that put all the effort in making that great component, having someone else stealing their idea and stealing their intellectual property. So that’s a first spot, it’s just not fair for them.
But also, let’s say you’re the customer and you don’t care about being fair to whoever’s making it. You’re wasting your time. Think about my example. Even though I’m an electronics engineer, I spent hours trying to make this part work. Now imagine other people that don’t have the same technical background as I do. Imagine how long it will take for them to find out they have a bad part. So one conclusion that I have: I don’t ever want to get close to these fake components again, because they’re a waste of my time, waste of money, and very frustrating.

I tried to get some advice from the guys at FTDI, what do I do, how do I avoid this happening in the future? Is there something I can see in the chip that will help me identify it’s fake? They told me just by looking at the chip, there’s nothing that you can see that will tell you it’s different. Actually, I think that the only way they found out the chip was fake is because when I sent one of those samples back to them, I think what they did, they put it maybe to an x-ray machine, some sort of machine that looks inside of the component, and there they can see the quality or the process that was used. I think that’s how they determined.

For me as a customer, as a consumer, I don’t have an easy way to determine. Think about it: if I buy something and I don’t have an easy way to determine it’s fake, the logical thing is that one way to protect yourself is buying from a reputable source. That was a suggestion that the FTDI representative gave to me. “Buy from one of our distributors.” And it happens that their distributors are the big names that we always hear about: Digi-key, Newark. By the way, there’s a tool called Octopart. It’s actually a website, and I really like the website for you to find authorized distributors and compare their prices. If you know the component that you want, go to that website and you type in the name of the component that you want and you’re going to do a comparison. It will show you the price of that component in several authorized distributors.

Now that I know that the part is a fake, it’s always easy to step back and see, stupid mistake. Of course, it’s always easy to do that. I have a side-by-side comparison on the Gadget Makers’ Blog website. You’ll see that the fake part cost $20 for 10 parts, so $2 for each piece. If I look at the authorized distributors, that part is about $8. A fake part costs $2, a genuine part costs $8. Looking at that big price difference is Newark trying to make a lot of money over this part, and that’s why the price is so big? No, probably not. That’s not the case. The case is that Newark is selling the actual part, the original, official part. This company in AliExpress is selling a fake. It’s selling something that looks like the part, but doesn’t perform anywhere close. 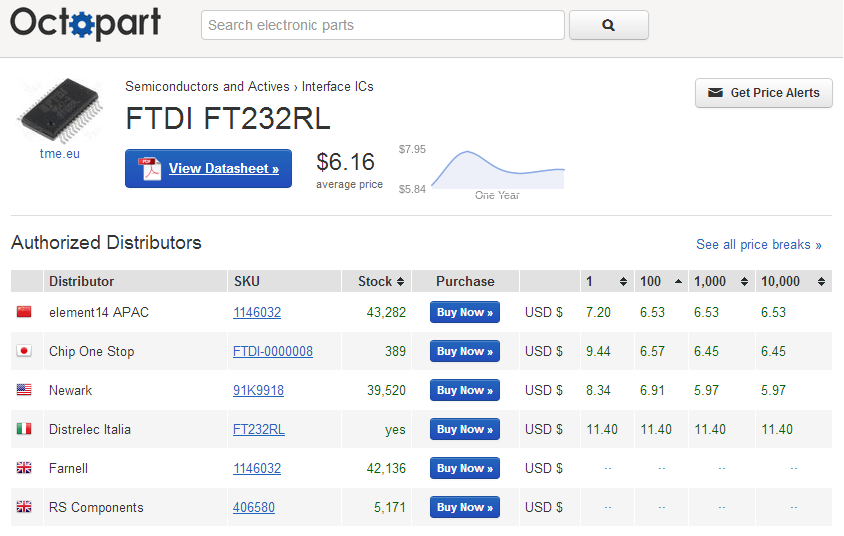 The funny thing is that that company on AliExpress got 98.7% positive feedback. Now, I’m trying to get my money back. It’s only $20 bucks, but I want to see how AliExpress responds to this. It seems like a joke. All the links that they have on their website to start a complaint, contact us, it leads you nowhere. I’ll post screenshots on the blog showing that it doesn’t matter where you click on their website to make a complaint; you reach a dead end. There’s no way to get the claim out. What I ended up doing, I ended up contacting my credit card company, asking them to cancel the charge. I’m going to try that way, because going through AliExpress, even though it looks like they have options for you to get your money back and all that, they make it extremely complicated.

My recommendation, if you want to develop a product, buy a product, if you want your purchase to be stress-free, you have to buy it from an authorized distributor. Now you know it.

One last thing: how people are misinformed about this topic of fake. I went to an Arduino forum; someone posted a picture saying that they bought an Arduino from a Chinese supplier, and they posted a picture. Just by looking at the picture, I told the person, that Arduino is a fake, is a counterfeit. You could see that the lettering on the board, the silkscreen on the board, it didn’t match the original Arduino silkscreen. I’ll post those two pictures on the show notes so you can see what an original Arduino looks like and what a fake looks like.

It is just like Coca-Cola. You cannot create a new type of cola and call your product Coca-Cola. That is a trademark owned by a company. You cannot arbitrarily just pick up a name and start selling products under that name. You could claim that it’s comparable to Coca-Cola, that it’s a type of cola, but you can never legally name your product Coca-Cola. So when these Chinese companies are creating boards based off of the Arduino schematic, which is fine, but when they’re calling themselves Arduinos, then that’s not legal. That’s an illegal practice. All makes sense, right?

So that’s it for today’s podcast. I hope that you enjoyed. I hope that you enjoyed my story. Maybe that’s something that you can apply when developing new components and trying to find distributors to buy products from. If you like the show, please leave us a rating at the iTunes store and visit our website, gadgetmakersblog.com, and leave your comments. There you’re going to find all the show notes with the screenshots that relate to this post. You’re going to find a link to Octopart and you’re going to see some technical data about this issue. Thank you, and see you next time.

Do you want to know the supplier’s name? Show your support for the Gadget Makers’ Blog  and share this story! Let your friends know a bit more about fake electronic component and share with them my story!