Deprecated: Methods with the same name as their class will not be constructors in a future version of PHP; OptinSkin_Widget has a deprecated constructor in /home/igoram2/gadgetmakersblog.com/wp-content/plugins/OptinSkin/main.php on line 310
 Arduino Power Consumption - Gadget Makers' Blog 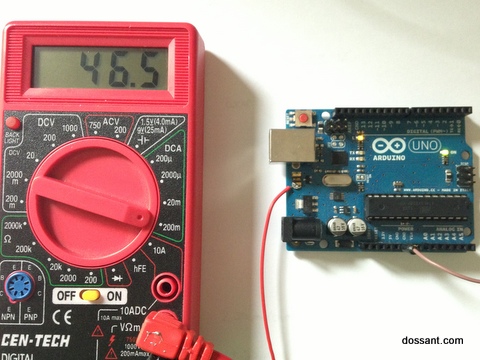 I often get asked what is the power consumption of an Arduino UNO R3 board:

“Do you have any idea how much current consumption does a Arduino UNO has in no load state (not driving any external output)?”

As I was also curious what the consumption is, I took the time and performed the test, and found out how much current the Arduino UNO R3.

Here’s the video that go over what I did in this test. Take a minute to watch it.

1. Setup the Arduino Uno Board

In my setup I soldered a wire into the fuse down from the USB connector. I ran that wire to my meter. It’s a inexpensive CEN-TECH  Digital Multimeter. The other lead from the meter I connected to my computers USB port, which is 5v. I had a breaker board that help me to do the connections. 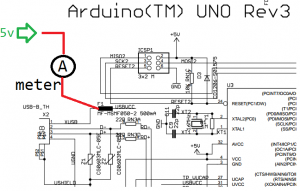 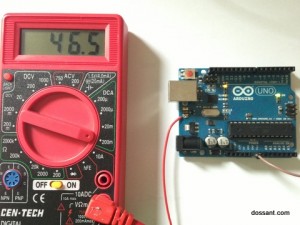 Let’s take the same Arduino UNO and run the sleep code. The code I have wake up every few seconds upon Watchdog timer timeout and toggle the onboard “L” LED. 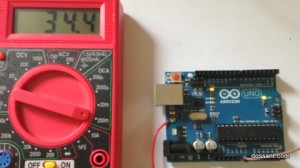 Not bad 46.5mA to 34.4mA is a 26% reduction in current draw. That’s not too bad. Maybe your application can benefit from that reduction and have its battery life extended a bit. 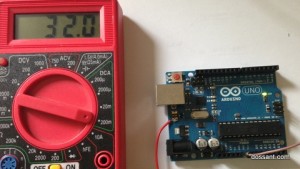 Notice now with the LED off current came down by 2.2mA. If need to squezze the current draw down, maybe you consider removing those two LEDs.

Now, let’s compare Arduino Uno with my custom board that I’m working on for a next kickstarter project to be launched by year’s end. Codename for that board is OLGA. Sign up to the mailing list to receive exclusive updates about that upcoming project. This will be a big one!

This board is simply the Arduino chip running at 8MHz 3.3v, as opposed to Arduino UNO’s 5V 16MHz. It turns out there Arduino Pro runs at 8MHz 3.3V, so that may be the easy path for power draw reduction 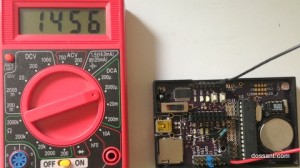 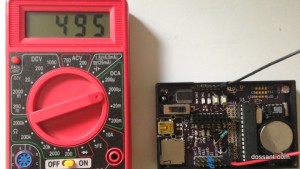 Who doesn’t like a nice chart? It’s like the saying goes…  “A chart is worth more than a thousand words” 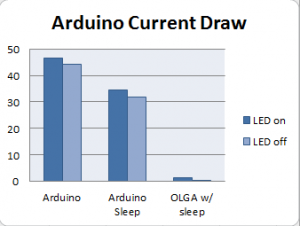 In conclusion, an Arduino Uno R3 with no load draw 46.5mA and that maybe too high if you’re designing an battery powered application. Using the sleep code does give you a significant improvement. a 26% in battery consumption, but if you want to hit the jackpot you’ll need to take a different route: goto 3.3v and 8Mhz, as you see in my OLGA board. That route can yield to 97% improvement in current draw, which means better battery life.

To get the Arduino sketch that I used in this article, help spread the word about us!