This tutorial shows how make a computer fan generator, using an old scrap fan you grab from an old computer or other electronic device with a fan. In order words, this tutorial shows how to convert a motor into a generator.
A motor is a device you provide voltage to spin. A generator is the opposite: you spin and it generates voltage. This is the simple straight forward explanation.
When you take a regular computer fan an spin its blades you will not get any voltage out of it, that is, unless you reconfigure the windings, and that is what this tutorial will cover. 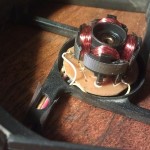 How to Make a Computer Fan Generator

I modified a regular computer fan to work as an electricity generator. I then used the steam from an espresso coffee machine to turn the fan blades and generate the electricity.
The typical PC fan is a 12V brushless DC motor and with a simple winding modification I converted it from a motor to a generator. In this tutorial show the steps tutorial how make that simple modification. I recommend that you read this: [1], it’s a nice background on the topic.
This modification can be performed on numerous computer fans. The fan that I used is a  3-wire 80mm fan.

1. A computer fan
2. One diode + one capacitor (to build a rectifier)
3. load (one resistor and LED)

1. Open the fan.
2. Solder a wire in pin 2 and pin 3 of the 4 pin chip. those are your coil outputs
3. take the 2 coil outputs and run through a diode bridge rectifier.
4. hook up you load in the rectifier output.

Step 1:  open the fan by removing the c shaped ring. See on references [1] and [2] tips on how to open it. If it’s taking you more than 10min to open it, the odds are you have a fan that way too hard to open, I recommending looking for another one. Each fan manufacturer have their own design and some are just way too hard to open

Step 2: Now that the fan was opened, you want to tap the coil start and end, and tap. I found hard to find the coil start & end, so I found there’s a 4-pin component with writing 276. I did a google search for “276 IC” and first result reveals the secret: it’s a “UH276, Complementary Outputs Hall Effect Latch Ic”. Now I know that the coil Also after some Google research I found the typical wiring diagram of a computer fan – called a brushless DC fan – and it matched closely with that typical application circuit.
Here’s the typical application of the UH276:

I did not put the ring back. The magnet had enough force to hold the blades in place.
Step 3:  Take the 2 coil wires you just soldered and input into the rectifier. For simplicity a 1/2 wave rectifier is enough. It uses one diode and one capacitor. almost any diode would work (e.g. 1N4148), 10uF. You may experiment with different cap values
Step 4: I used a blue LED with a 100 ohm resistor to limit the current as my load. The activation voltage for the blue LED is higher than the red. So I suggest start with the red
Future work:
There’s plenty of room for improving the rectifier portion of this project. Here’s a few ideas that I may explore:
1. replace diode (1N4148) with Schottky diode. A regular diode only starts conducting when voltages is above 0.7v whereas the typical Schottky diode starts conducting currents when voltage is above 0.3V. This lower threshold voltage more power you get.
2. add voltage regulation, such as a 3v zener shunt regulator, if you need a more steady output voltage. For example, if you want to power up a microcontroller.
Other fans:
1. if the fan you have does not look like mine, I suggest doing a google search for the chip on in, and hope you find the datasheet, so that you know where the coil in connected to. The objective is tap into the coil leads an bring to outside the fan

Note that I added a voltage multiplier circuit to increase output voltage, high enough that the LED would turn on.

Questions/comments? Drop me a line! I’d love to hear your comments.