Deprecated: Methods with the same name as their class will not be constructors in a future version of PHP; OptinSkin_Widget has a deprecated constructor in /home/igoram2/gadgetmakersblog.com/wp-content/plugins/OptinSkin/main.php on line 310
 End-Of-Line Test Design for MICO - Gadget Makers' Blog 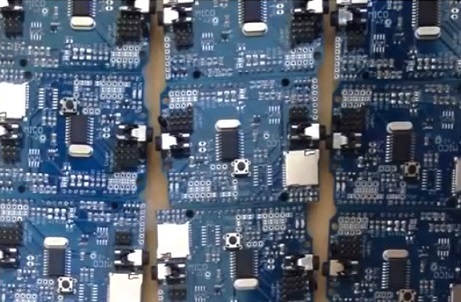 Just because MICO board design is complete, it doesn’t mean that design work is done!

(The MICO Shield for Arduino is a project funded via Kickstarter on Oct/2013. If you want to get one get from here)

It’s now time to create a quick and comprehensive functional test procedure that every single board will go through prior to shipping. The test is called the end-of-line test, or EOL test. Like the name suggests it’s a test to be performed at the end of the manufacturing line to a product before it leaves the facility.

EOL is a functional check that is designed to test as many board features as possible. Without this test there would be a higher risk that a defective board reach the end customer, which is not desirable because it’s a hassle for both seller & buyer.

Interestingly many designers choose not to have this test performed because of added cost and complexity in designing a comprehensive procedure. Instead they might rely solely on other tests at a printed circuit board level, visual inspection or just the high reliability record of the automated assembly process (SMT Pick and Place).

Ideally the designer would incorporate features into the circuit board layout itself  to facilitate the testing. For example dedicated test pads at convenient locations or even dedicated circuits, just for the purpose of EOL testing.

So next time you’re in a project where you plan to have hundreds or thousands units made, make sure you spend some time planning EOL testing ahead of time. Maybe adding some test point to the board that makes it quick and easy for function to be checked.

The technique of  designing in thinking about facilitating the manufacturing process is called  DFM (Design for Manufacturability).

For MICO, the EOL tests several systems, including

The screenshot below it shows that took me 13sec to check one MICO board. 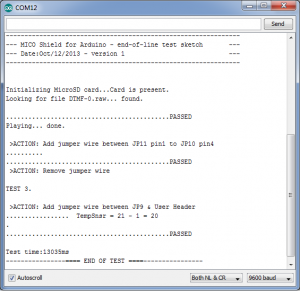 Of course another advantage of a well designed EOL test is cost. Facilities or whoever your hire to test the boards, typically charge a per hour rate to test the product. For example if you can reduce the per unit test time from 5min to 30sec your per unit cost drops drastically.

Isn’t worthwhile pay 0.08/board and highly reduce the chance your customer will receive a defective board?